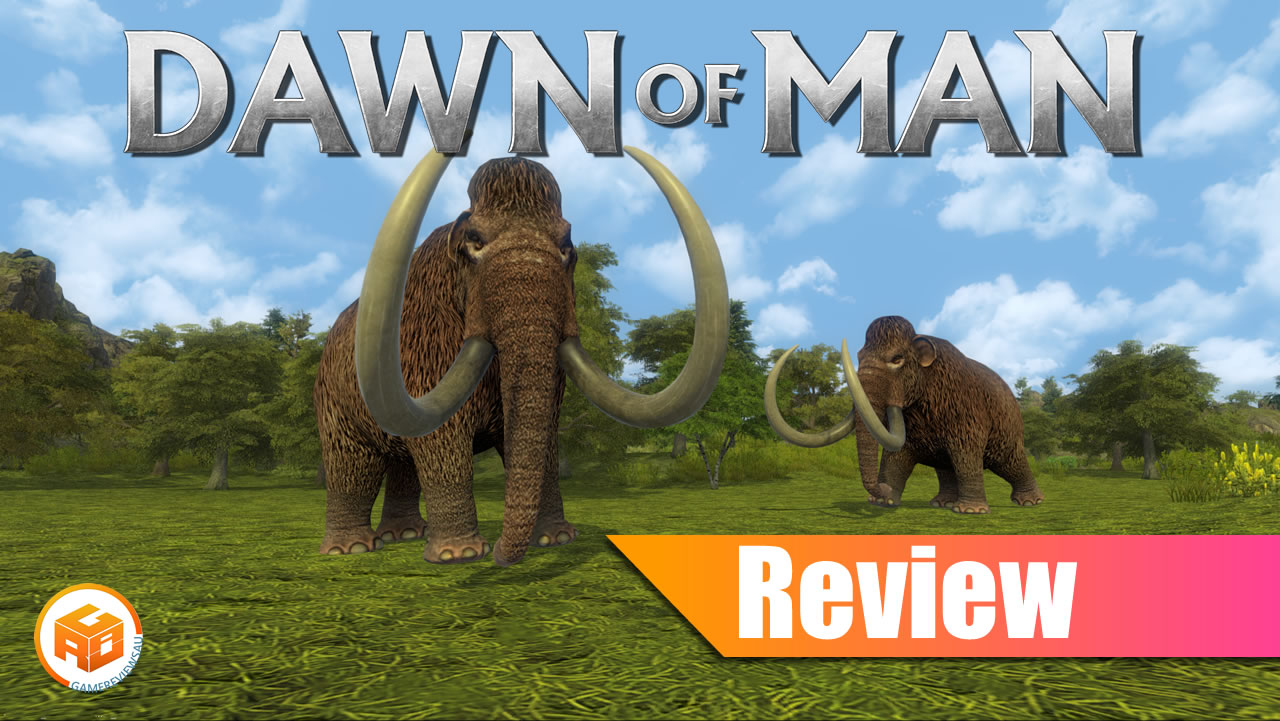 Dawn of Man is the latest offering from Madruga Studios, otherwise known for their basebuilder, Planetbase. This time around, instead of playing through mankind’s beginnings on a new planet, we’re playing on our own. Dawn of Man has you oversee a small stone age tribe, guiding them through the ages and all the difficulties and threats that come up along the way. It has all the usual hallmarks of a city builder: technologies, structures, resources, tasks, and threats both natural and human in origin. Read our Dawn of Man review below to find out more!

Starting out, your tiny village won’t have much going for it: a few tools, some tents, a crafting site, a small fire. Gradually, discovery by discovery, the tribe advances. In the beginning, a cave bear attack can decimate your population but, with more advanced weapons and brave warriors to wield them, the dangers of the wild become less of a concern. However, growth brings its own dangers. Tribe members will die if they have no access to warm clothing during the harsh winters, or will starve if you haven’t amassed enough food during the fertile seasons. The initial part of the game is a delicate balancing act as you work to grow, but not too fast, and to hunt, but not to the point that the local animal population dries up.

Technological advancement comes through knowledge points, which are awarded for small milestones, such as having gathered 100 sticks, or having hunted a new animal for the first time. Once you have enough points, you can unlock a new technology which might allow access to new buildings, tools, or other technologies. Between each technological age (eg. Stone age, Bronze Age, Iron Age), there’s a key technology that must be unlocked which, while expensive, opens up a new range of possibilities. Some technologies are more important than others, for example, Cereal Domestication is possibly the most important tech in the game because it lets you create your own reliable food source, letting you grow your population without worrying about exhausting fish or animal populations, or waiting until summer to pick fruits. On the other hand, a tech like Swordmaking, while it might prevent a few deaths caused by raider attacks, doesn’t have a huge effect on your tribe’s wellbeing.

Speaking of raiders, this is an area of the game that leaves something to be desired. They act as one of the dangers that must be dealt with, attacking your settlement at random intervals after you reach a certain age. Their technology will either keep pace with yours or develop independently, depending on the difficulty level. I’m still not sure where exactly they come from, or what they want (other than to kill my dogs), and I’m equally confused as to why they think it’s a good idea to attack a village when they’re outnumbered 10 to 1. On normal difficulty at least, they never seem to be a real threat. Maybe a few villagers will die or a gate will be knocked down, but it’s never more than a minor setback.

As the game continues, it becomes a matter of managing resources and planning the expansion of the village. It can be challenging to balance the farming, production and lodging needs of the village, along with fending off the occasional attack, but it becomes fairly repetitive after a while. The overall range of buildable structures and tools is quite narrow, although it is sufficient for the needs of the tribe. There’s no real win state to the game either, although there are several milestones which can be unlocked. This is normal for a sandbox game, although this genre usually makes up for the lack of structure by having a wide array of possibilities, or by throwing curveballs at the player that leave them scrambling to pick up the pieces. Dawn of man doesn’t seem to really do any of this.

Madruga Studio’s prehistoric citybuilder does have some cool features and ideas. For example, each animal or human in the game has a small camera icon, which can be clicked on in order to give a closeup 3rd person view. It can be fun to watch someone wander around, or to look over the shoulder of a raider as they throw spears at your guard towers before being mauled by a guard dog. Another cool aspect is the variety of charts and stats that allow the player to track their population growth over time, or their overall settlement prestige level – although it would be cool to have an even wider range of data to check out. It’s also quite handy that most of the micromanagement is automatic, you can basically leave your villagers to their own devices once hunting is no longer necessary, although it should be said that the AI isn’t the best in this respect, and some might still prefer to micro their villagers.

However, despite the cool concept, Dawn of Man feels like it’s lacking something. It doesn’t have the complexity of other citybuilders like Cities Skylines, but it lacks the emergent storytelling of smaller scale sandbox builders like Rimworld. And, while each villager has a name, a rough age, various meters for health/morale/hunger/etc., they all seem to be essentially identical. And who are the raiders? Are they wandering tribes that haven’t had a chance to develop agriculture yet, or are they from neighbouring rival settlements? While the core concept of the game is solid and interesting enough, it seems to lack personality, that hook that creates memorable moments – like if hunting a mammoth was more than just a matter of sending hunters to throw spears until it falls down; or if villagers had different skills so you could build an elite party of hunters or farmers; or if you had to worry about neighbouring settlements stealing your resources.

Overall, Dawn of Man is an interesting city builder that tackles the perhaps difficult to implement concept of prehistoric settlements. Madruga Studios have succeeded in creating a solid gameplay core that can be quite relaxing to play, and that could result in some interesting mods. However, it seems to lack personality, that drive towards a goal or away from grave danger that is the hallmark of a great game. The gameplay mechanics work well enough, but seem a little sparse and underdeveloped. Nevertheless, if you love city builders and prehistoric scenarios, this is definitely a game to consider. If you’re looking for a fresh, stimulating citybuilder, this isn’t the best choice out there, but is definitely worth putting on the watch list.