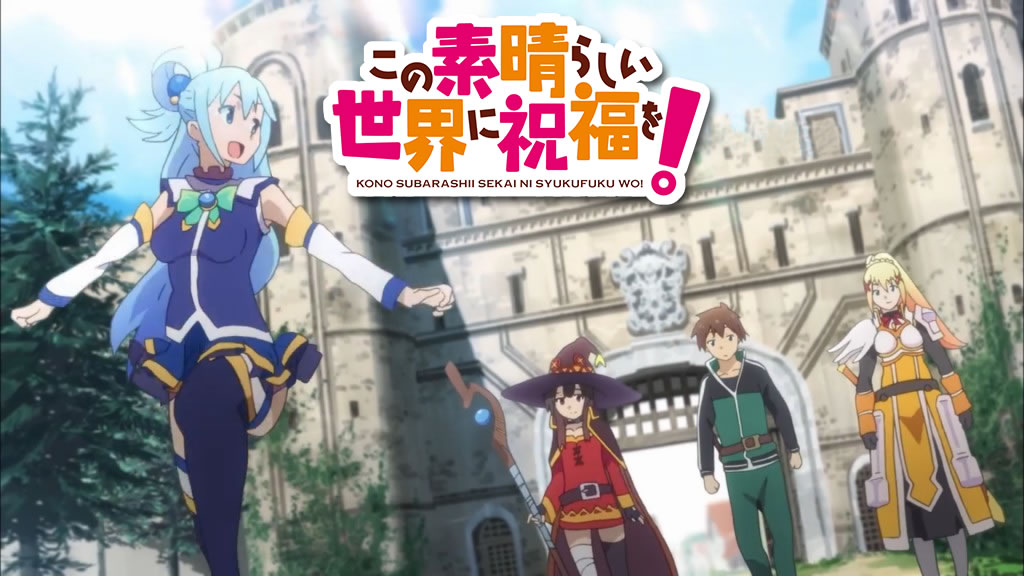 What happens when a shut-in gamer finds himself in a fantasy world filled with gods, goddesses, magic and monsters? A hilarious adventure ensues with a modest score of characters, each with their own quirky traits and fancy getups. Find out what we thought about this comedic, fantasy Anime in our Kono Subarashii Sekai Ni Shukufuku Wo Review!

When he meets with a terribly tragic (but incredibly hilarious) fate at the feet of a fellow student, Kazuma finds himself faced with a decision that’ll change the way he continues on in the afterlife.

The afterlife, in Kazuma’s case, is a world that very closely resembles something you’d find in a computer game. How convenient for him! However, this world is host to an evil demon king, and it’s up to the heroes of this world to defeat it.

Starting off in a town called Axel, Kazuma Satou joins a guild and acquires the job of Adventurer. Along his travels he finds out first hand just what it takes to be an Adventurer and eventually finds himself the leader of a rag-tag bunch of fellow guild-members.

What I really enjoy about Kono Suba is that it shows how life would really begin for a new adventurer. Comfortable shelter and food wouldn’t be easy to come by, and the struggles involved in accumulating appropriate equipment needed to successfully complete quests would be rather taxing.

The host of characters who end up finding themselves in Kazuma’s party, all have their own quirks which are incredibly charming. One such example is a stubborn magic user called Megumin. She’d probably fit very well in another Anime called Love, Chunibyo & Other Delusions (Chuunibyou demo Koi ga Shitai!). Armed with only one incredibly powerful spell that instantly leaves her incapacitated for the rest of the day when cast, Megumin proves to be an incredible asset to Kazuma’s party.

Expect some awesome animations in Kono Suba, specifically when some of the higher-tier spells are cast. The animators pull them off beautifully and, unlike some Anime, Kono Suba doesn’t overuse these standout animations to the point that they become boring and tedious.

Comedy-wise, Kono Suba delivers laugh after laugh in each and every episode. The type of humour ranges from chuunibyou-istic monologues to unusual perverted desires. No matter what Anime genre you’re into, Kono Suba will be sure to make you at least chuckle, if not guffaw.

The musical score found throughout Kono Suba is lovely to listen to and fits in perfectly with the fantasy setting. Masato Koda definitely delivers some A grade material, which will suck you right in to the town of Axel and it’s surrounding areas.

Kono Subarashii Sekai ni Shukufuku wo (God’s Blessing on This Wonderful World!) is a great Anime to watch for those seeking something to quell the nostalgia of previous computer game inspired Anime, such as Sword Art Online.

The ecchi-ness of Kono Suba never goes too far and the humour will leave you rolling around in delight, waiting for the next episode to be released.

In summary, Kono Suba is great to watch for Anime lovers of all genres and any age. Do yourself a favour and go check it out as soon as you can!

[schema type=”review” url=”https://gamereviewsau.com/kono-subarashii-sekai-ni-shukufuku-wo-review/” name=”Kono Subarashii Sekai Ni Shukufuku Wo” description=”What happens when a shut-in gamer finds himself in a fantasy world filled with gods, goddesses, magic and monsters? A hilarious adventure ensues with a modest score of characters, each with their own quirky traits and fancy getups.” rev_name=”Kono Subarashii Sekai Ni Shukufuku Wo Review” rev_body=”Kono Subarashii Sekai ni Shukufuku wo (God’s Blessing on This Wonderful World!) is a great Anime to watch for those seeking something to quell the nostalgia of previous computer game inspired Anime, such as Sword Art Online.” author=”GameReviews AU” pubdate=”2016-02-24″ user_review=”4″ min_review=”1″ max_review=”5″ ]