Oddworld Stranger’s Wrath promises quite a lot. Seeing as it was such a hit on consoles and PC’s alike, I was actually quite excited to get my hands on this action adventure. Sadly, I was completely let down by the fact the controls make it near impossible to play.

To begin with, launching Oddworld Stranger’s Wrath was incredibly exciting. I remember the good old days of playing Abe’s Odyssee and outsmarting the Slig and I couldn’t wait to get into a game set in the Oddworld series.

I know Stranger’s Wrath doesn’t centre around Abe whatsoever and the surroundings are completely different as well, but that’s not what disappointed me. Not at all.

The promise of a new protagonist in a new environment and playing from a new perspective got my nerd juices flowing. “This will have to be a game I set aside a few hours for”, I told myself, completely willing to devote my full attention to this new adventure.

Finding a nice comfortable spot on the lounge, I launched the game on my LG and waited with bated breath. My eyes widened in excitement as the game began. Painting the scene with nasty critters, desolate wastelands and a Stranger adorned with a rather spiffing hat and armed with a crossbow loaded with spikey toothed, puffy balls of death.

The graphics looked really great which further added to my elation. The intro movie set the scene perfectly with it’s portrayal of the bad-ass Stranger and his line of work. I couldn’t wait to get started capturing bounties!

Then the game started…

How I was saddened to find that when porting the game over from console, the controls were thoroughly butchered. If you were to obtain yourself a gaming controller compatible with your device, you’d be laughing. But this gamer believes when you purchase a game, it should be coded to be suitable for the device on which you are playing.

Thankfully there are a fair few options to make controlling the Stranger a tad easier. Nothing game changing though, so I was quite offended to be provided with a game that has so much promise but fails to jump the first hurdle. That hurdle being the most important part of any game: the ability to control your character.

Navigating your character seems like the greatest puzzle of Stranger’s Wrath. Trying to make the protagonist run in a straight line seems more baffling than working out how to defeat Ruby Weapon in FF7 before the internet was widely accessible. Timing a jump whilst trying to run in a straight line? Harder than Chuck Norris’ pectoral muscles. Aiming for an enemy who can’t seem to stand still and is hell-bent on blowing your head off? Game over.

It’s not just the movement controls that are frustrating to the point of having your head explode and then waiting for it to regrow so you can finish reviewing a game; the way the camera keeps swinging around depending on if you’ve positioned the Stranger near a wall, is nigh on impossible to contend with.

I wish I could praise Oddworld Stranger’s Wrath more, but after falling off so many cliffs only to climb back up again ad nauseam, I’d had enough. I can’t even begin to imagine what it would be like facing a boss. 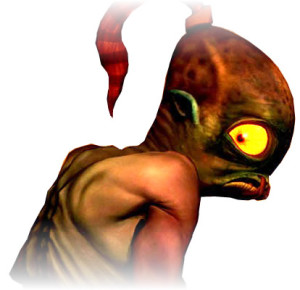 Oddworld Strangers Wrath seemed to be over for me before it even began. Maybe one day in my future where I’ve become as patient as the Dalai Lama, might I give it another shot. But to be fair, when a game’s controls are as bad as this, it doesn’t even matter how good the game itself is. A gamer should be allowed to enjoy a game and it’s complexities without having to constantly fight with the direction your character is moving. Leave the fighting to your character, not the camera angle.

The weaponry is quite interesting, especially the different types of ammunition; and the bounty system is really quite inspired as well. These points could almost be the saving grace in a world where walking seems to be hardest part.

If you’ve got the patience of a sloth, or a game-pad to play with then go ahead and download Stranger’s Wrath. I sincerely hope you enjoy the storyline and gameplay. But for this gamer, as dramatic as it sounds, I feel like I’ve been cheated out of a couple of dollars.

I think I’ll stick to my fond memories of Abe’s Odysee before I start to associate the bad taste from Stranger’s Wrath with the Oddworld series.

[schema type=”review” url=”https://itunes.apple.com/au/app/oddworld-strangers-wrath/id923555295?mt=8&uo=4&at=11l32yZ” name=”Download Oddworld Stranger’s Wrath” description=”Oddworld Stranger’s Wrath promises quite a lot. Seeing as it was such a hit on consoles and PC’s alike, I was actually quite excited to get my hands on this action adventure. Sadly, I was completely let down by the fact the controls make it near impossible to play.” rev_name=”Oddworld Stranger’s Wrath Review” rev_body=”If you’ve got the patience of a sloth, or a game-pad to play with then go ahead and download Stranger’s Wrath. I sincerely hope you enjoy the storyline and gameplay. But for this gamer, as dramatic as it sounds, I feel like I’ve been cheated out of a couple of dollars.” author=”GameReviews AU” pubdate=”2015-04-14″ user_review=”2″ min_review=”1″ max_review=”5″ ]