The Banner Saga describes an epic story of giants, humans and unnerving monsters known as the Dredge. Beautiful, hand-painted landscapes make up the world your hulking convoy of Varl traverse. Numerous stops along the way completely immerse you in the storyline, resulting in a constant want for more.

In a world inspired by Vikings where the sun has abandoned it’s everlasting post in the sky, humans and a race of giants known as Varl unite to battle a common foe; the Dredge. 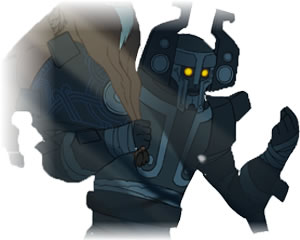 The Dredge are a race of beings who tower even over the Varl.  Clad in black armour, they have been the ancestral enemy of the Varl since their unnatural creation by a jealous God. Hostile to all forms of intelligent life, they sow chaos and destruction across the land.

Thought to be extinct after a number of prolonged and violent wars, the Dredge are slowly returning for a reason none can fathom. This is but a brief snippet of what one can expect from this epic adventure.

Having been successfully funded via a KickStarter campaign in 2012, Stoic Studios released their work of art across multiple platforms at the beginning of 2013.

Receiving such a mass of support, their campaign not only reached it’s initial goal of $100,000USD, but accumulated a whopping $723,866USD in total from 20,042 backers. Since then, the game has received a very warm welcome to the world of gaming and sets a new cornerstone in the genre of tactical role-playing games.

The Banner Saga is a fulfilling journey through cities, mountains, forests and a whole lot more where captivating visuals entice you and leave you wanting more.

Allowing the player to control the path they take (albeit unknown) Stoic Studios have written a gigantic story in this Viking inspired fable. 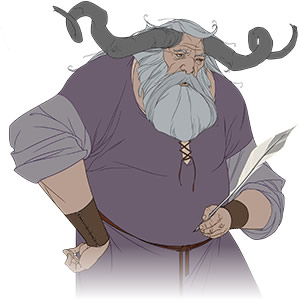 When you’re not wracking your brain about what to say to who, knowing that each choice could lead you down a different path, you often find yourself engaged in combat with numerous denizens of this fantasy world. This is where the gameplay really shines.

Combat comes in the form of turn-based encounters where you control a team of up to 6 combatants made up of Varl and human alike. Battles bring with them a steep learning curve as you are left to ponder which classes to arm yourself with and how best to utilise them in the fray.

For those who are familiar with other tactical role-playings games like Final Fantasy Tactics or Tactics Ogre, you should slip into these fights quite comfortably. For everyone else, pay close attention to the tutorials at the start of the game as there’s quite a lot to take in.

During your travels, you will also be offered the opportunity to hone your skills and strategies by taking part in mock battles through means of a training tent accessed from your camp.

[schema type=”review” url=”https://itunes.apple.com/au/app/banner-saga/id911006986?mt=8&uo=4&at=11l32yZ” name=”Download The Banner Saga” description=”In a world inspired by Vikings where the sun has abandoned it’s everlasting post in the sky, humans and a race of giants known as Varl unite to battle a common foe; the Dredge.” rev_name=”The Banner Saga Review” rev_body=”The story is rich and absorbs you from the moment you see your giant team shadow over the townspeople as they make their way to the first city. Making choices that influence the way the story pans out, make for mindful gaming. Almost as if you were the story teller yourself.” author=”GameReviews AU” pubdate=”2015-03-17″ user_review=”5″ min_review=”1″ max_review=”5″ ]