Match four games are like bad grammar – popular with young people and all over the internet. It gets a bit tedious seeing the plethora of different match four games advertised all over the web. That’s why it’s so refreshing to dive into a game as ingenious and unique as Alien Path by Appxplore! Packed full of RPG elements, heaps of aliens with different powers and a multitude of enemies with diverse abilities, Alien Path is one of the most addictive games I’ve laid my hands on! Read our Alien Path review below to find our more.

It’s been a while since Appxplore’s recent releases, Crab War and CarneyVale: Showtime, but the team are still going hard churning out very successful games. Alien Path has to be their greatest success yet, recently soft launched in Canada, Australia, Malaysia and Singapore! With gameplay to keep you glued to the screen for hours on end (if you have enough in-game stamina that is) and cute graphics reminiscent to another of their games, Alien Hive, this is one of my most favourite games to have had the pleasure of reviewing! 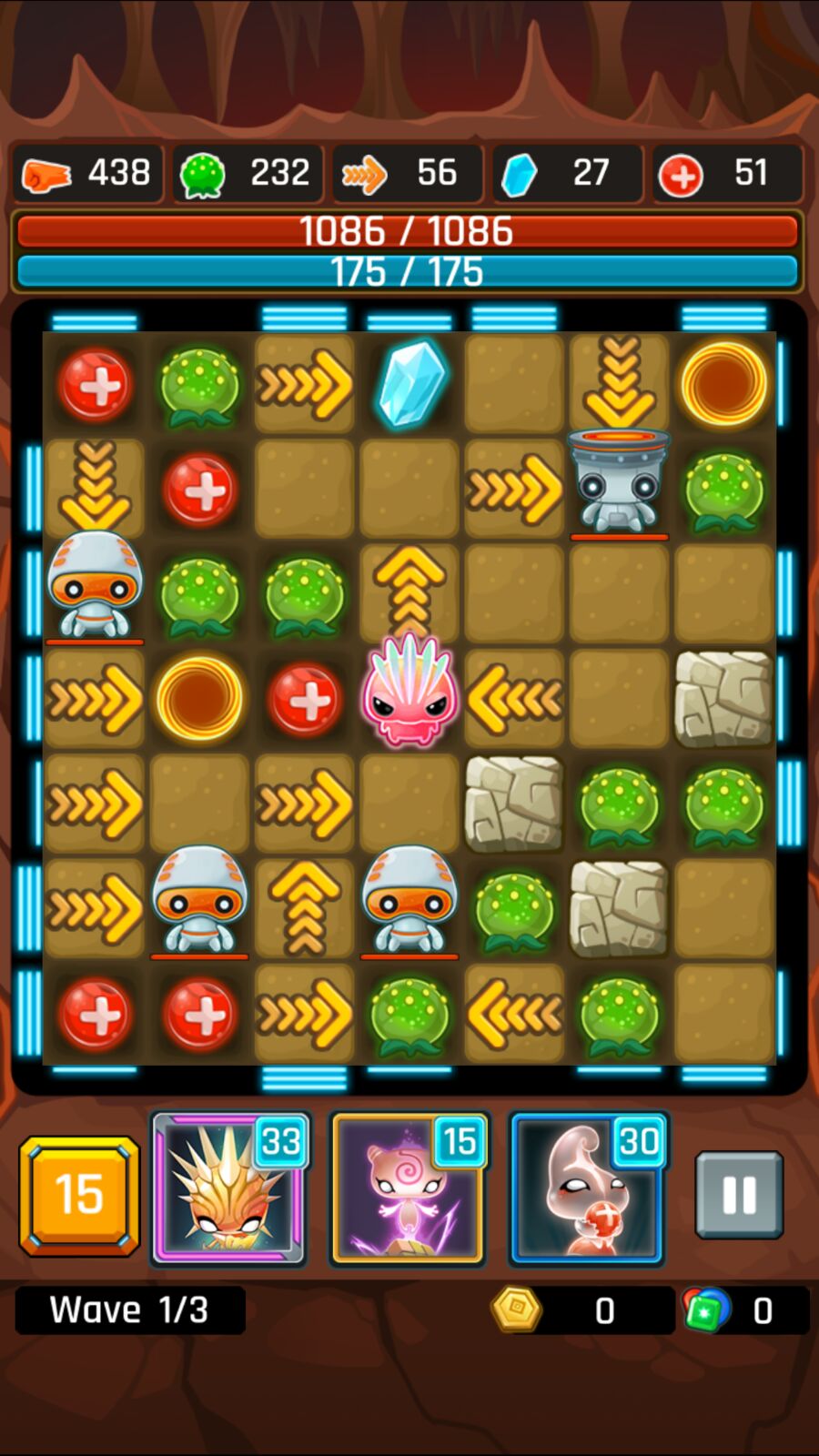 In Alien Path you take control of an alien on a seven by seven square gameboard. The idea is to destroy all robots in the specified amount of waves until you’re done. At the start of a turn, you slide your alien along the board either vertically or horizontally depending on which way you swipe. The alien’s trajectory can be changed by rotating tiles with arrows on them. By bouncing off these arrows you can create a short or long path for your alien to follow in order to crash into and destroy all robots. Once your turn is over, surviving enemy robots shoot you wherever you are on the gameboard and make their own moves.

Sounds simple right? Well it’s a simple concept but the amount of thought gone into the rest of the game is very impressive. Alongside your alien, enemy robots and arrow tiles are green pods that explode when touched, dealing damage to the nearest robot; potions to restore health to your alien; crystals to restore your alien’s energy (energy is required to use special abilities and to rotate arrow tiles); smashable blocks to add a little bit of extra difficulty by getting in the way of your alien’s path, and portals to teleport your alien across the board.

By utilising all of these different elements, you can potentially finish a level in the amount of moves specified in the bottom left corner of the screen to obtain a special reward. 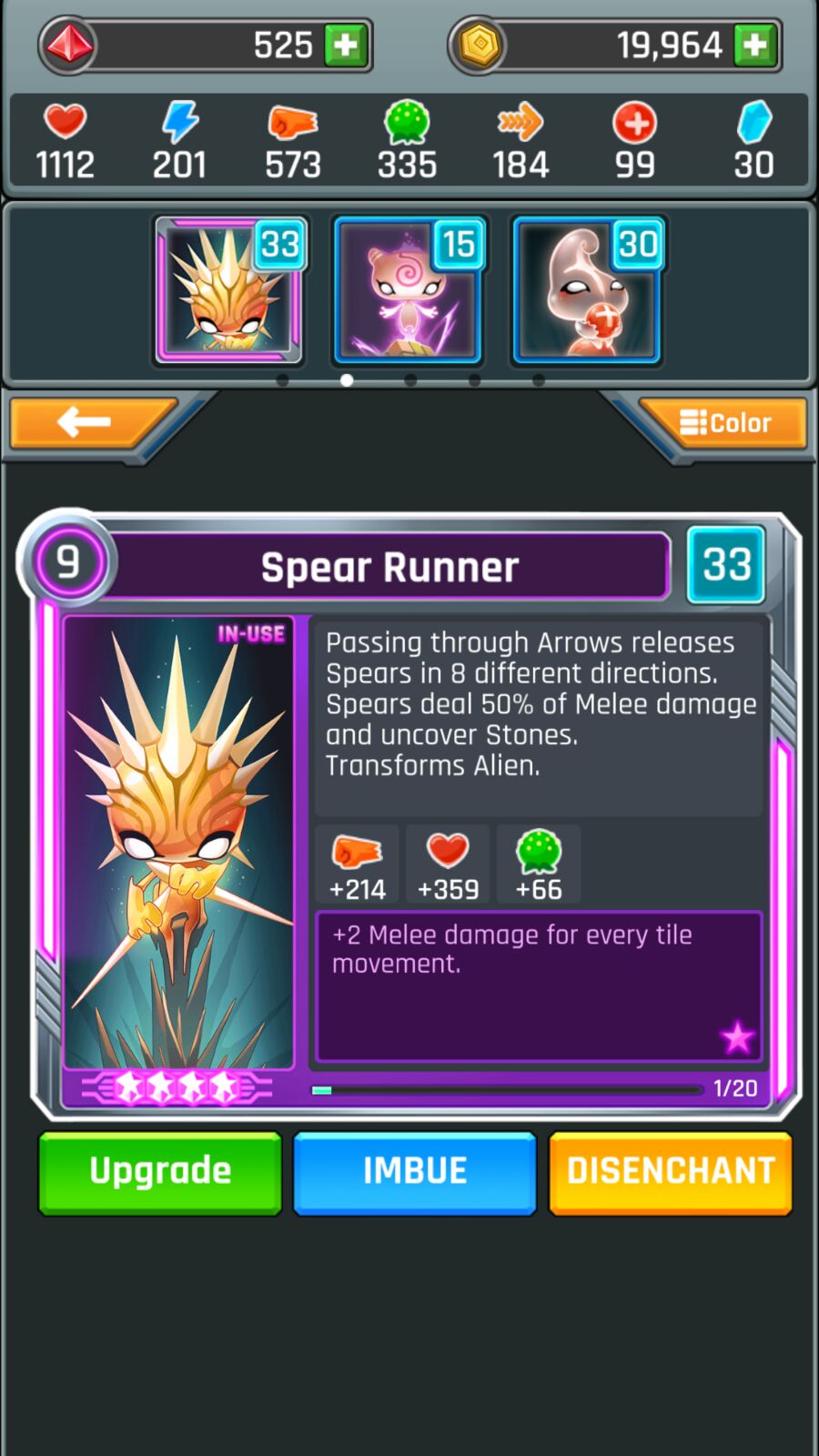 Apart from the gameplay in Alien Path, the other really great part about it is the amount of upgrades, new aliens and alien cards there are.

Alien cards of differing rarity can be acquired by beating certain levels or purchasing them with premium currencies that are quite easily amassed.

Although the premium currencies can be bought using real world money, advertisements telling you to buy them are very rarely thrust in your face. Premium currencies can also be obtained for free after levels, by completing achievements/daily quests, or watching video adverts.

Unfortunately when a game is free-to-play you’re very likely going to see adverts around the place. But when they become an easy way to gain rewards, I don’t see the harm in them.

Despite how great Alien Path is, there are a couple of minor downsides. Such as the fact it needs constant internet connection to play, and the stamina system. As you may have learned from previous GameReviewsAU reviews, we don’t like stamina systems. However, in Alien path, levels can take quite a while to get through, so stamina has a lot of time to recharge for your next play-through.
[schema type=”review” url=”https://play.google.com/store/apps/details?id=com.appxplore.alienpath&hl=en” name=”Download Alien Path” description=”Match four games are like bad grammar – popular with young people and all over the internet. It gets a bit tedious seeing the plethora of different types advertised all over the web. That’s why it’s so refreshing to dive into a game as ingenious as Alien Path by Appxplore! Packed full of RPG elements, heaps of aliens with different powers and a multitude of enemies with diverse abilities, Alien Path is one of the most addictive games I’ve laid my hands on!” rev_name=”Alien Path Review” rev_body=”I highly recommend Alien Path to anyone that enjoys puzzles, or even for anyone who has ever picked up a match-four game and thought it was mildly fun. I guarantee Alien Path will have you hooked from the first level and you’ll only want to play more and more. Download it now!” author=”GameReviews AU” pubdate=”2016-09-23″ user_review=”5″ min_review=”1″ max_review=”5″ ]