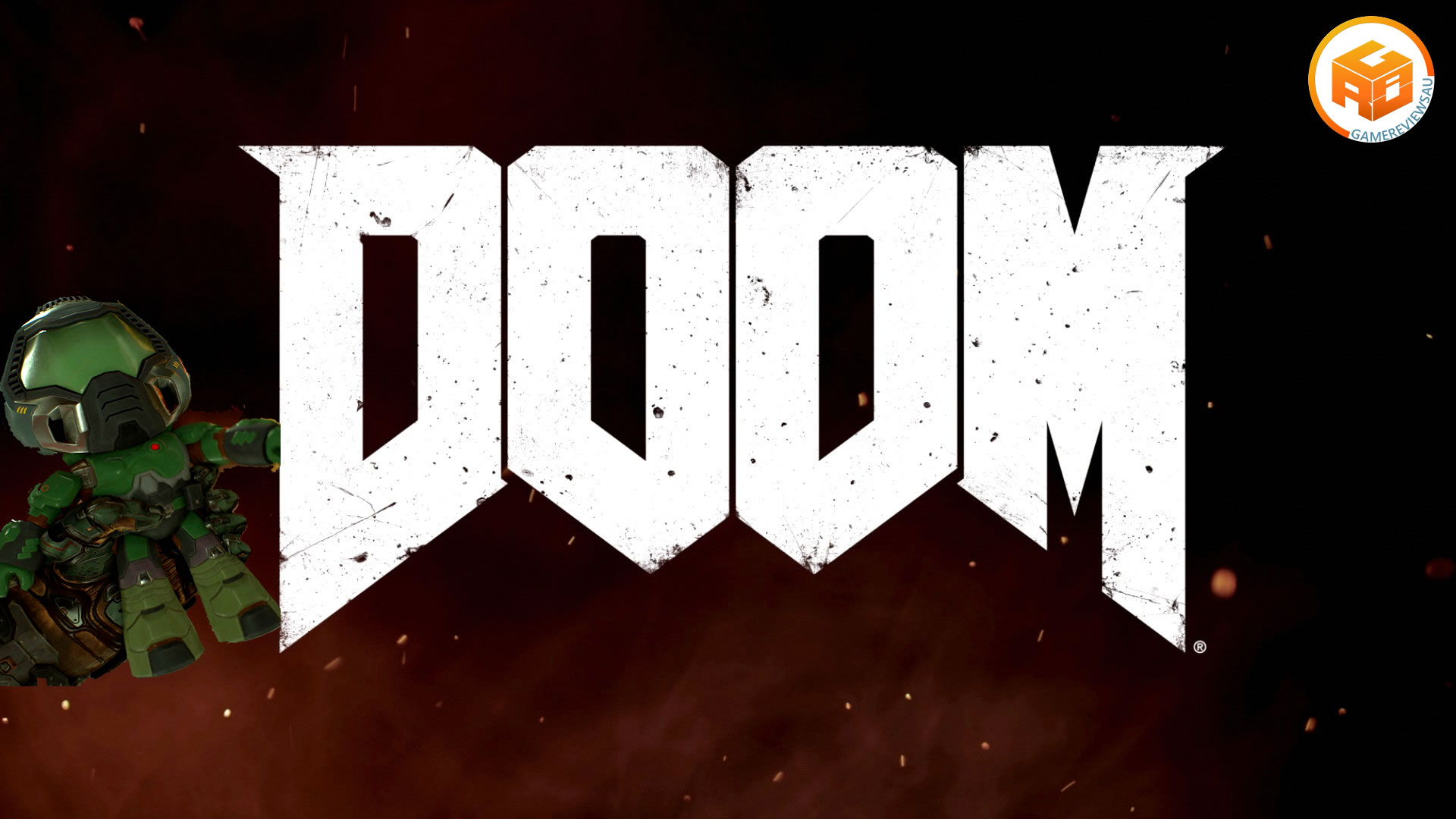 Smash demon face in a very familiar classic brought back to life with stunning visuals, exciting, fast-paced combat and plenty of little secrets and easter eggs that nod to the original DOOM games. Read our DOOM 2016 review below to find out more!

Resurrecting a game that never died can be a dangerous thing, especially when it’s one that set the bar for first-person shooter gaming. The original DOOM games came as quite a pleasant surprise to gamers back in the day, and the gratuitous violence, blood and gore brought about it’s fair share of controversy.

Step forward twenty-five-ish years and pretty much every game that comes out garners some type of controversy be it a provocative female pose or realistic-looking fatalities. The 2016 iteration of DOOM developed by id Software and published by Bethesda seemed to fit right in with the level of blood and guts games of today seem to incorporate. But being originally known for it’s over-the-top gore, DOOM 2016 stepped up and took the level of violence to a new stage.

The game follows the same idea the previous games focused upon. You take the role of an unnamed space marine known to many throughout the series simply as “Doomguy”. Doomguy wakes up on what looks to be some kind of a experimentation bench. Both arms are attached to the bench by chains, but this guy is not one to be reckoned with as he deftly lifts his arms up and breaks free of his shackles. With his first spare hand he grabs an approaching demon by the face and smashes its head into the corner of the bench on which he lies. After his second hand is free, he jumps off the bench and picks up a pistol which he uses to blast the remaining demons heads off.

A little while down the track he gains access to the Praetor suit. A fully customisable piece of armour that grants Doomguy some rather superhuman abilities. The customisation comes in the form of upgrading certain aspects of your arsenal such as alternative fire modes for your weapons, survivability enhancements and also hidden runes that can be equipped to provide further upgrades.

Coming across demons in DOOM is usually quite an event. The music gets intense, demons start appearing from every direction (and trust me, with the size of the maps, there are a lot of directions for them to appear), and bullets start flying. With plenty of different demons to contend with, from the one-punchable Possessed who are really there as a way to score some extra health through glory kills, all the way to monstrous bosses that provide a helluva challenge. 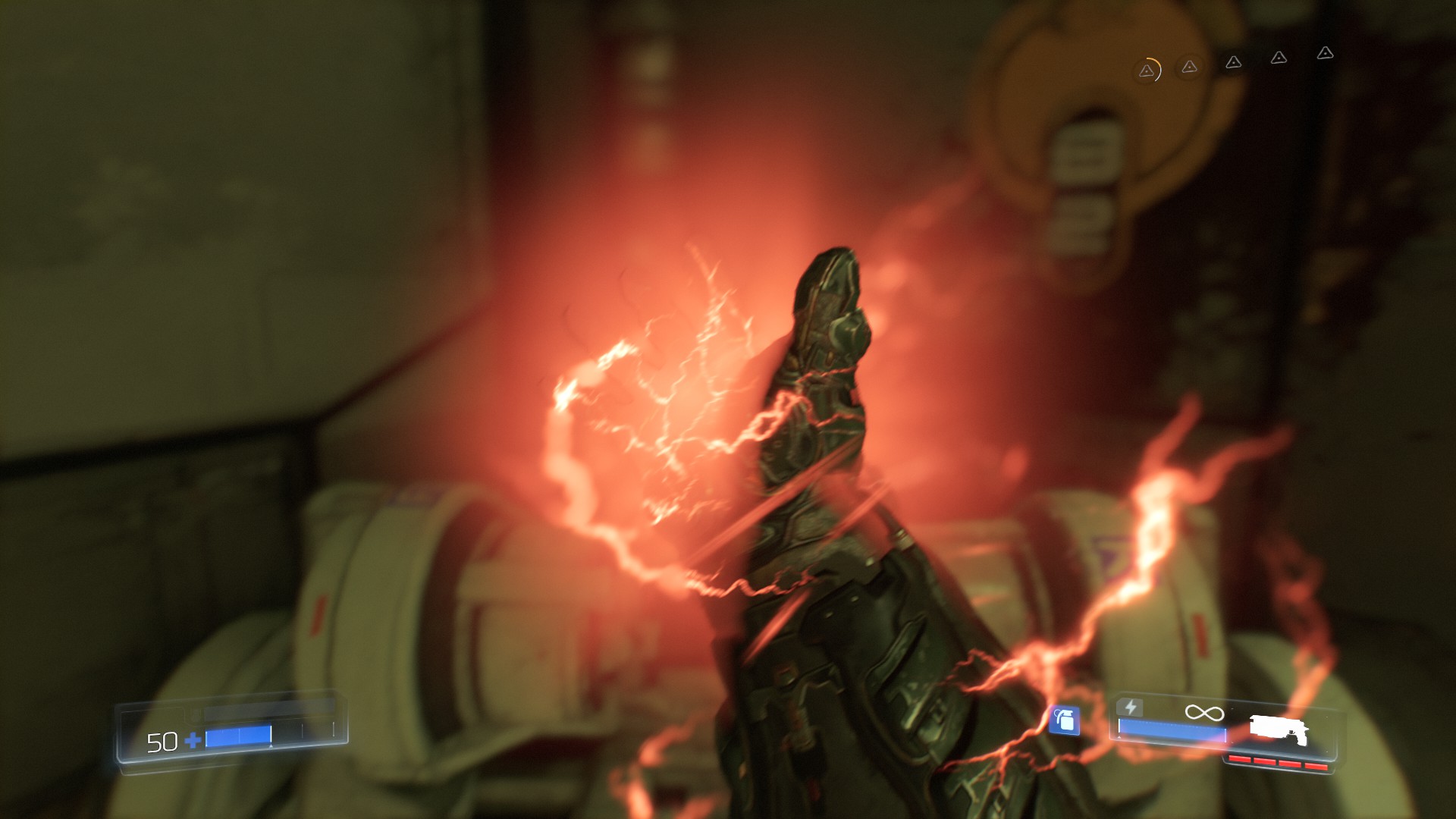 DOOM 2016 feels a bit like a bullet-hell type game as you’ve got to be constantly moving to avoid enemy projectiles and surprise melee attacks. When demons start-a-spawnin’ and you start-a-blastin’, the game really starts to feel super exciting. You’ll be jumping and dodging, shooting and reloading and the part I love the best is doing glory kills. Glory kills are basically finishing moves that can be performed on enemies that reward you with health. You can also perform these up-close and personal killing blows on staggered opponents however you won’t get any health. Remember the Possessed I mentioned before? Well you can easily walk up to them and initiate a melee attack which will instantly allow you to follow-up with a glory kill to net you some quick, extra health.

Not only do all of the above make combat feel great, but gone are the days of walking up to waist-high ledges only to not be able to progress any further. In this iteration of DOOM you can climb up and catch yourself on ledges. I haven’t had so much fun playing a first-person shooter since… well, ever!

One of the great things about DOOM is the vast array of weapons. You start off with a small pistol that has unlimited ammo and the ability to fire a charged up shot, but as you progress you’ll gain access to other guns and weapons such as a rocket launcher, shotgun and even a chainsaw.

The chainsaw is great! It allows you to instantly kill an enemy in a very gruesome and bloody way. Just equip your chainsaw, walk up to the unsuspecting enemy of your choice, tap them on the shoulder and press the fire button. You’ll instantly start carving into your foe with the sharp end of your chainsaw. Sounds a bit cheap right? Well the chainsaw has very limited ammunition and finding more ammo for it isn’t an easy feat. But if you’re running low on ammunition for other weapons, killing enemies with the chainsaw is your best bet as heaps of ammo will drop from whichever enemy you slice up.

If I could summarise the boss fights in DOOM with one word it would be “freakingsweet”. Not only do the bosses look super scary and awesome but they pack one helluva punch! Their weaponry is awesomely overpowered and it makes you really have to think and use your surroundings to evade oncoming assaults.

After pummeling a boss with your own arsenal of doom-bringing weapons, the boss will topple over and you’ll get the opportunity to perform a super satisfying glory kill on them. The downed boss will reward you with a weapon upgrade point to help give you the upper hand for your next battles. 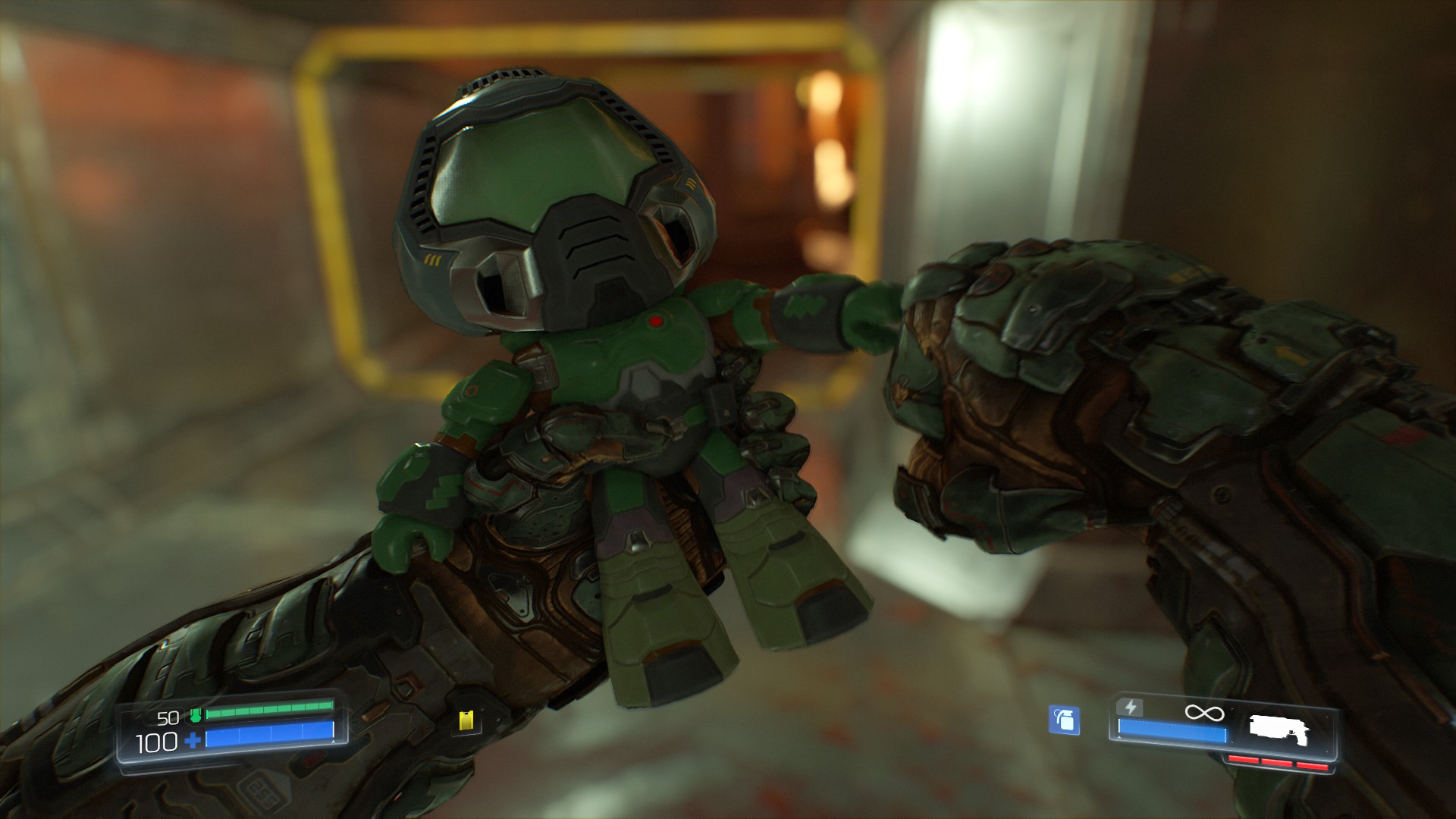 One such part of DOOM 2016 that I really appreciate is the amount of Easter Eggs stashed around the place. In each mission are a couple of secrets/areas to discover. Every mission contains a secret that unlocks a classic DOOM level to play in Arcade mode. One of the secrets I found, involved pulling a lever that then played some awesome retro music.

Other such little hidden goodies come in the form of Doomguy figurines placed in rather hard to find locations. Another awesome Easter Egg I found was when you fall and die in lava, you see Doomguy’s hands up in the air on your screen and as you slowly sink to the depths of the intensely hot magma, one of the hands pulls a thumbs up. An obvious nod to when the T-800 destroys himself in Terminator 2, and the last thing you see of him is a hand sticking up doing thumbs up. Very amusing!

Graphically-speaking, DOOM 2016 is simply stunning. Locations and environments are very highly detailed, enemies and their designs are familiar but a helluva lot more detailed than what we remember from the classic DOOM games. However, being set on Mars, there won’t be a lot of colour. The mission environments are mainly single-coloured which obviously makes sense, but when you run around outside for a long period of time only looking at an orange locale, your eyes start to feel a bit weird. That might be my age speaking, but nonetheless it’s how I felt while running around looking for as many secrets as I could. Also the music in DOOM is epic to say the least. 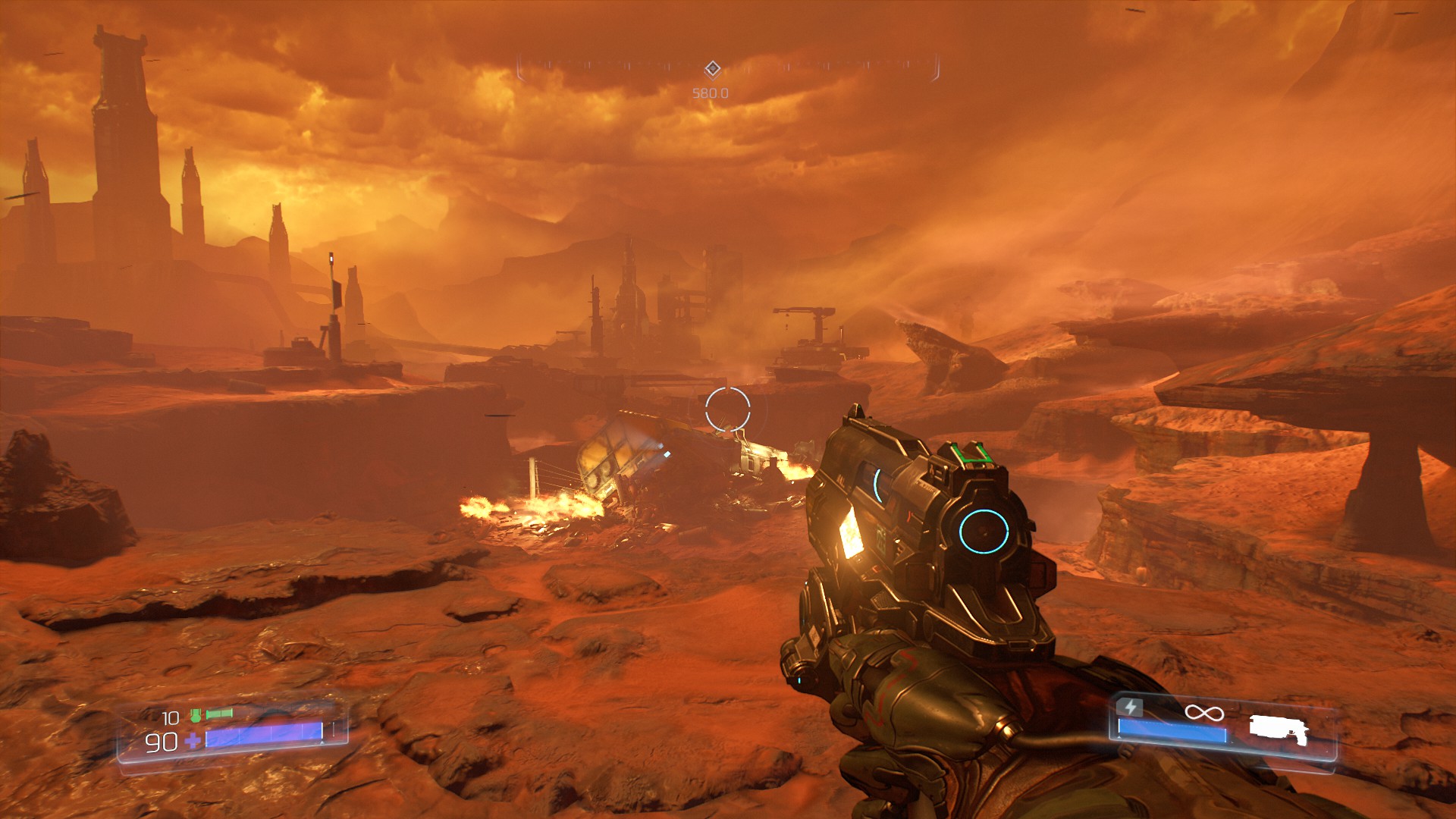 DOOM 2016 is an incredibly decent remake of a classic and packs in heaps of fast-paced gameplay, high-def graphics, plenty of unlockables and secrets, and overall a really enjoyable experience. 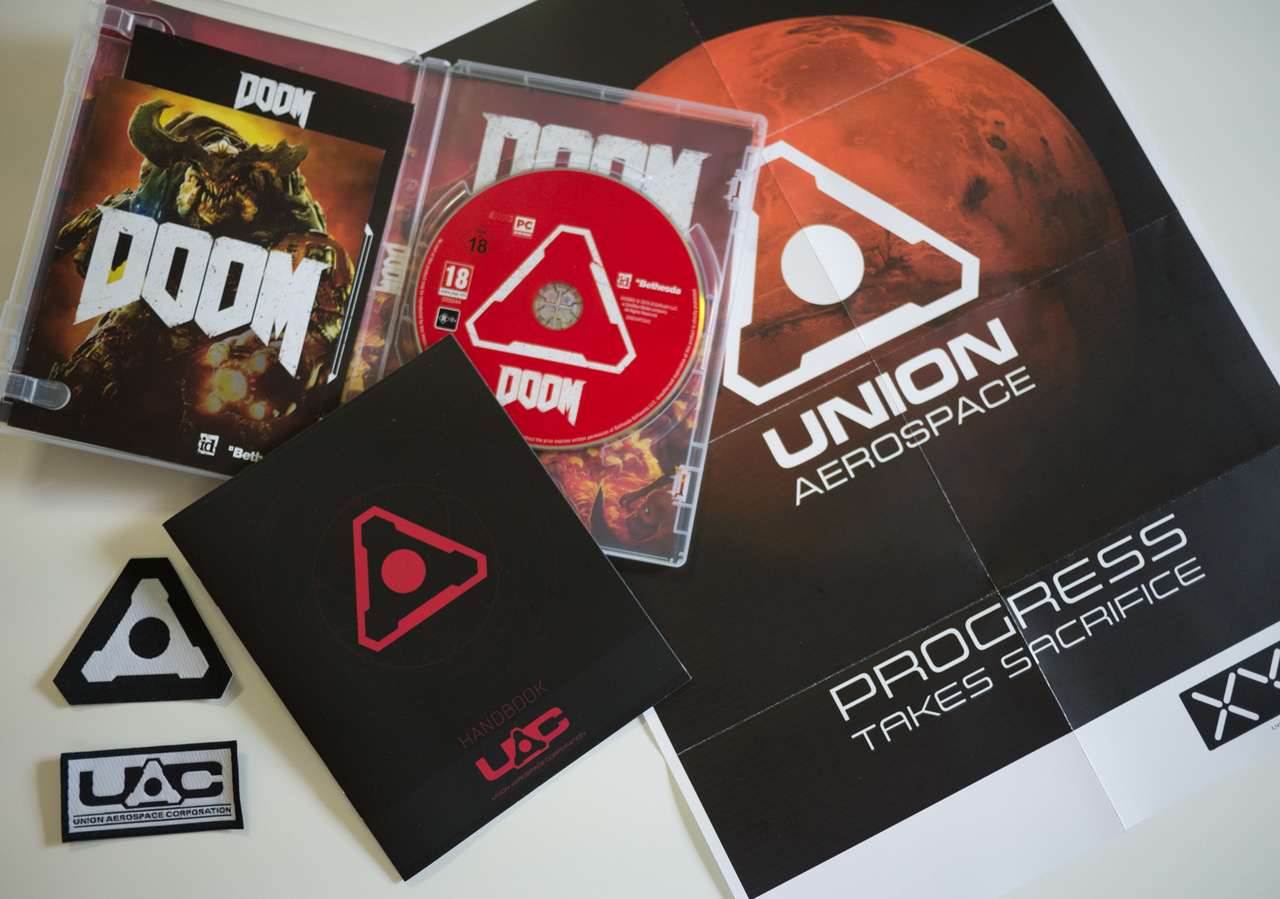 I played the DOOM UAC Pack which came with a handbook, Union Aerospace poster and some iron-on UAC decals. These extra little additions were a nice surprise to receive alongside such a wonderfully made game.

For lovers of extra game modes, there are also a few decent additions apart from the campaign. There’s Arcade mode which lets you aim for the highest score you can in levels that you can play at any difficulty. Kill multipliers help with your score and the whole concept adds much more replayability to the game once you’ve finished the campaign and got sick of the multiplayer.

Speaking of multiplayer, this is another little extra way to play the game. There are game modes such as team deathmatch, domination, freeze tag and plenty more. Not only can you run around blasting the heck out of other players, but demons are also available to play as by picking up a demon rune. Super fun! You can see what the open beta of DOOM 2016 multiplayer looked like including gameplay of one of the demons here.

Overall, DOOM 2016 is a totally legit remake of something a lot of gamers hold close to their hearts. id Software and Bethesda have done a fantastic job getting this amazing, modern first-person shooter into our hot little hands!

[schema type=”review” url=”http://store.steampowered.com/app/379720/DOOM/” name=”Download DOOM 2016″ description=”Smash demon face in a very familiar classic brought back to life with stunning visuals, exciting, fast-paced combat and plenty of little secrets and easter eggs that nod at the original DOOM games.” rev_name=”DOOM 2016 Review” rev_body=”Overall, DOOM 2016 is a totally legit remake of something a lot of gamers hold close to their hearts. id Software and Bethesda have done a fantastic job getting this amazing, modern first-person shooter into our hot little hands!” author=”GameReviews AU” pubdate=”2017-06-14″ user_review=”5″ min_review=”1″ max_review=”5″ ]