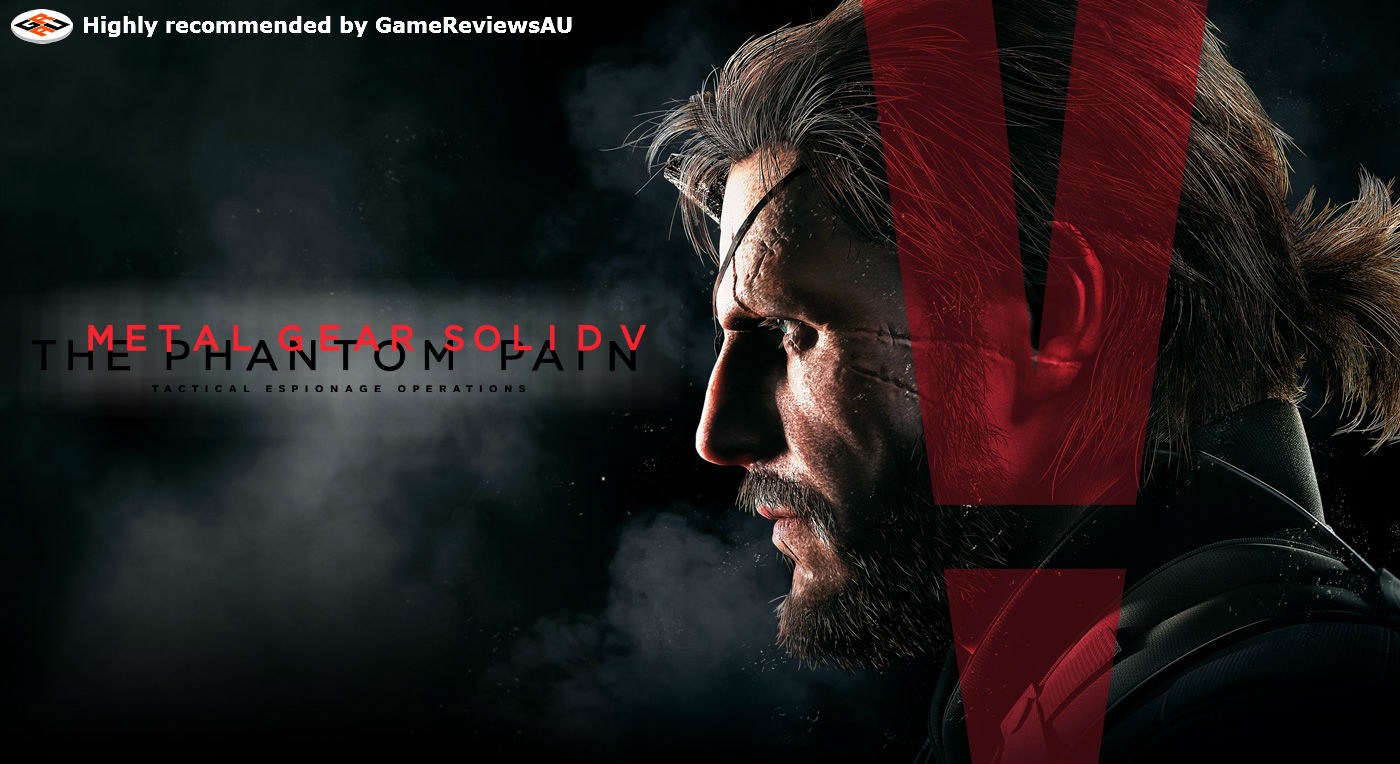 Jam-packed full of action from the get-go, Metal Gear Solid V: The Phantom Pain packs a massive punch. Controlling Punished “Venom” Snake is comfortable, infiltrating enemy bases are as challenging as one could ever ask for and including the familiar Mother Base injects a satisfying RPG element with upgrades, farming for mats and more. Read more in our Metal Gear Solid V The Phantom Pain review below!

War is not fun. War is not graceful. War does not produce invincible heroes. This latter point is driven directly into our brains the second Metal Gear Solid V: The Phantom Pain is started. Awakening in what looks to be a hospital bed, our protagonist learns that he’s been in a coma for nine years. With the aid of TENS machines and other muscle stimulators, his body is still in relatively good condition. What’s left of his body that is.

Standing in and controlling the shoes of Big Boss, A.K.A. Punished “Venom” Snake, you are placed in the time period of 1984. Nine years after Ground Zeroes and eleven years before the first Metal Gear game which is set in 1995.

The name Phantom Pain refers to a medical condition amputees commonly experience, where sensations from a no longer existing limb or part of their body, can still be felt by the individual. These sensations are usually pain.

After Snake’s doctor and nurse are dispatched by an unknown woman, a bandaged man comes to the aid of our hero. The beginning of The Phantom Pain resembles a sequence experienced towards the end of Guns of the Patriots where you can only move at a crawl’s pace.

Seeing as you’ve only just revived from the coma, your muscles are still hard to control despite the constant attention they’ve received whilst being unconscious for all those years. For the time being you can only follow your mysterious saviour by pulling yourself along the floor using your arms.

Very soon you come to realise the whole building has been infiltrated by armed soldiers who seem to be killing everyone in sight. Here’s where you are introduced to controls such as crouching, crawling along in prone position, taking cover, and aiming and shooting.

By following the unknown bandaged man, you are directed safely (if you do what he says) through the hospital. As you progress, some weird occurrences start to take place. A red-haired woman in a gas mask defies gravity by floating through the air, and a man on fire blasts soldiers away with explosions of flame.

Once you make it out of the building alive, you are rescued on horse-back by none other than Revolver Ocelot. After this, the game becomes intense fairly quickly.

During the game you’ll come across plenty of familiar faces and a few new ones. The new faces are great and add that extra bit of mystery to the entire experience.

Metal Gear Solid V: The Phantom Pain is played out in missions. Previous Metal Gear installments had you following a story from start to finish. Metal Gear Solid: Peace Walker introduced the concept of controlling a Mother Base whereby you extract soldiers/prisoners from the field to join your ranks and put them to work in different teams. These teams allow you to research things such as new weapons, tools and other beneficial items.

From a story-lover’s point of view, the mission concept might feel a little bit like a way to nonchalantly spread out the time you’ll invest in the game. However, MGSV couldn’t effectively pull off the sheer massiveness of it’s game world without utilising missions.

With an overall map reported to be larger than those seen in games like Skyrim and Grand Theft Auto V, MGSV embraces the term “open-world” brilliantly. And with any open-world game, it wouldn’t be as enjoyable without heaps of different things to do among the massive areas.

Each mission can be re-played in case you didn’t manage to complete all of it’s side-objectives. Side-objectives will have you doing things like dispatching an enemy commander from long-range, extracting a certain individual from the area, or harvesting a specific plant, to name a few. Side-objectives award extra heroism which is effective in passively receiving new recruits to join your Mother Base.