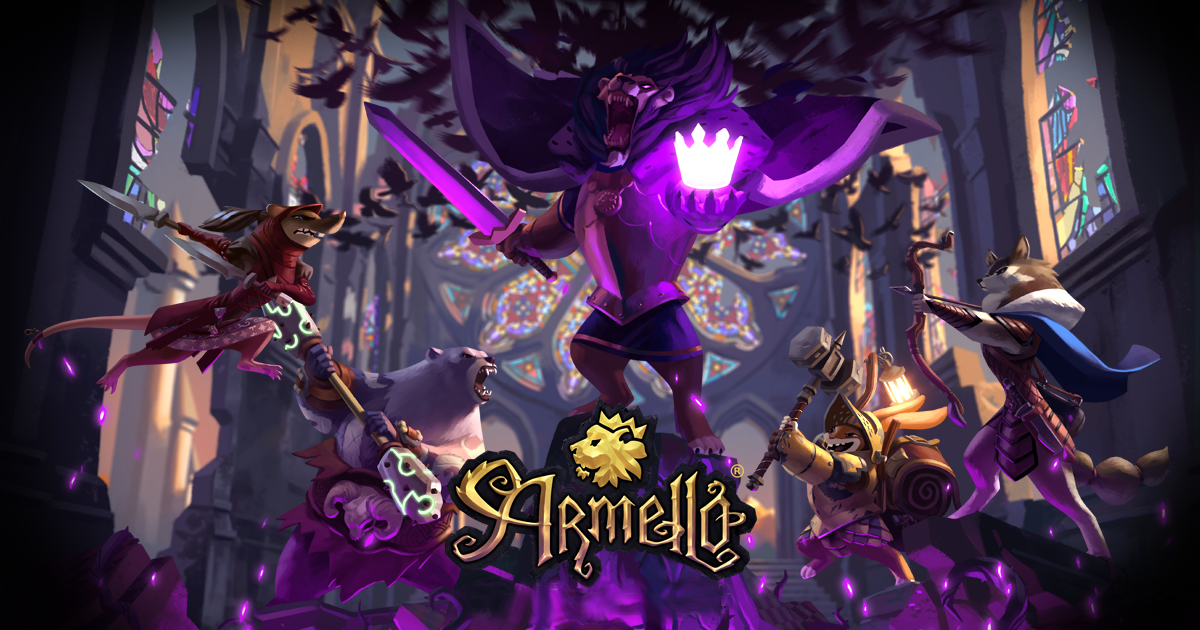 From the moment I first laid eyes on the trailer for Armello, I was captivated by the enchanting 2D animations. Armello offers a superb table top game experience easily accessible from your computer. But is that all it has to offer? Read our Armello review to find out!

Armello introduces us to the world you play in via means of a beautifully animated 2D intro movie. Here you are given the first glimpses of the heroes at your disposal in-game.

The graphics seen in the intro are rather reminiscent of something you would have seen in an older Disney film like Robin Hood. The colours used are really bright and the designs for each character are so original.

In the Prologue you’ll be introduced to each animal clan one by one. During this introduction, Armello also fills you in on why you have to do what you do.

Here’s the gist: The King of Armello has fallen ill to a dark and mysterious curse caused by something called “Rot”. Slowly, the illness consumes him, twisting his thoughts to madness. In response to this, Armello’s Great Clans have sent forth their Heroes to try and take the throne.

This is all well and good, but after you’ve completed the Prologue, that’s it for the story. There’s no extra Story Mode or anything like that. It’s just the gameplay to keep yourself busy with.

Now, it sounds like I’m not happy with the gameplay, but that couldn’t be further from the truth. The gameplay of Armello is so incredibly unique and there’s so much to do and so many characters to play with. I just really wish there was more story implemented somehow.

For the hardcore tabletop game veteran you even have the option to make your own custom match. Control things such as timed turns or starting with extra health. It’s yours to do with how you wish.

I really like the characters in Armello. They’re all designed so uniquely and each have their own special abilities to bring to the table. Below are a couple of my personal favourites to play.

A member of the Wolf Clan with a high fight stat, Thane excels in battles during the night.

His special ability is called Sword Master. Any cards he burns to gain extra attacks during battle, pierce the opponent’s defences.

From the Bear Clan, Sana does better during the day. She has a higher spirit than the other heroes.

Her special ability is to utilise that extra spirit in place of the fight stat whilst engaging corrupted foes.

Armello’s gameplay is very much like a table top game. You can playing against A.I. controlled opponents or your friends in multiplayer.

Let’s get started with how the game plays. Each turn, a character gets three moves by using up their AP (Action Points). Different types of terrain or building can be found scattered around the hexagonal places of the play-field. By moving onto these different hexagons, different events are triggered. A few examples can be found below:

By standing in a forest, the player gains stealth at night. Being in stealth doesn’t make you impervious to attacks, but rather gives you the upper hand if someone steps into the forest whilst you are hidden. The enemy will then be Ambushed.

By exploring a dungeon, you get the chance to find extra gold, items, followers and many more bonuses. Be wary though, you might accidentally spawn a bane that’ll attack you straight away.

Capturing settlements provide you with one gold per settlement each time dawn comes around. Settlements can be stolen by any player.

[schema type=”review” url=”http://store.steampowered.com/app/290340/” name=”Buy Armello on Steam” description=”From the moment I first laid eyes on the trailer for Armello, I was captivated by the enchanting 2D animations. Armello offers a superb table top game experience easily accessible from your computer. But is that all it has to offer?” rev_name=”Armello Review” rev_body=”Armello is one of the most charming games I’ve ever played and has such a unique play-style that you’ll probably not find anywhere else.” author=”GameReviews AU” pubdate=”2016-03-28″ user_review=”4″ min_review=”1″ max_review=”5″ ]