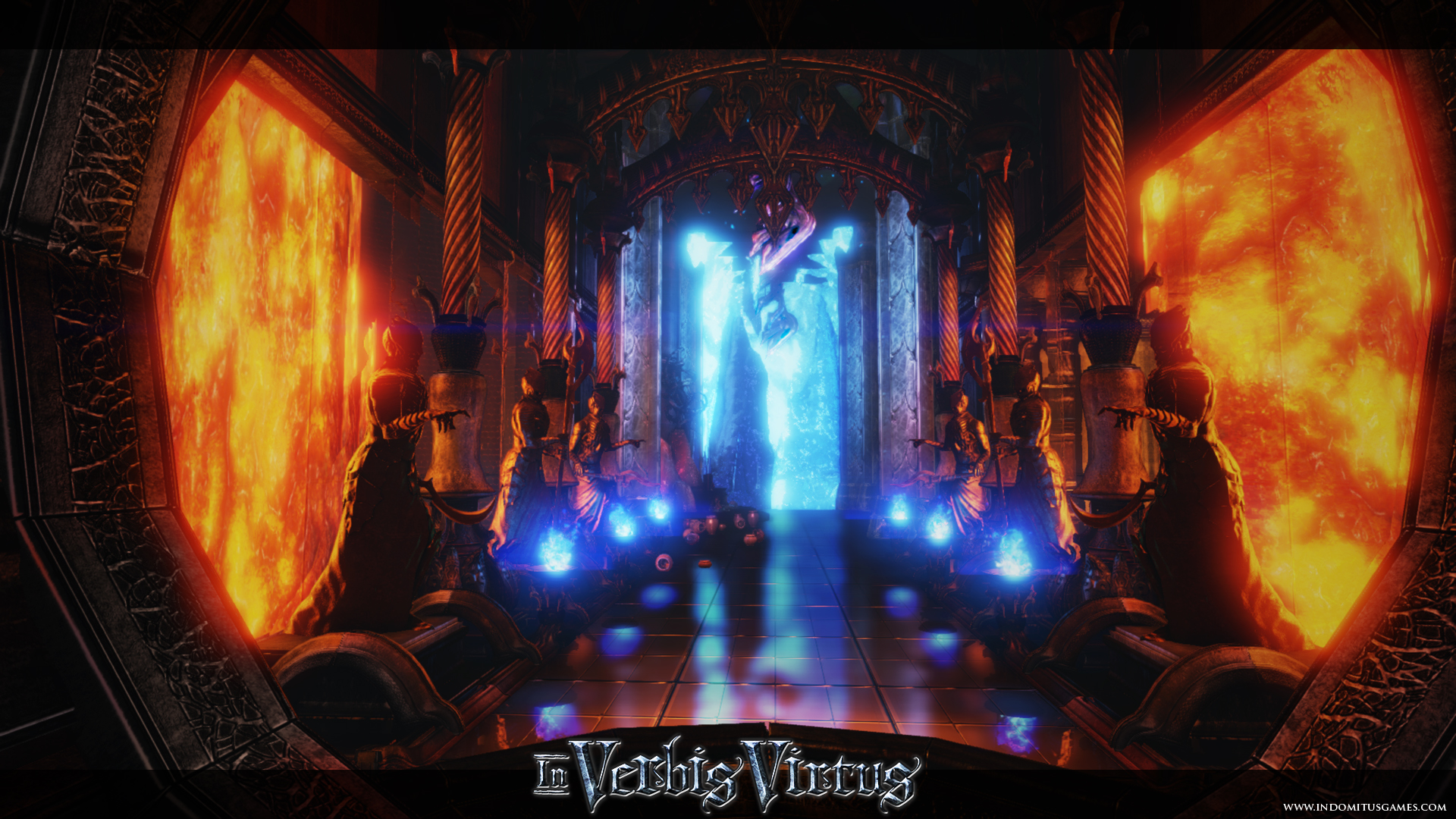 Hold onto your socks gamers, you’re just about to get the opportunity to geek out like you’ve never geeked before! Enter the world of In Verbis Virtus and learn the Maha’ki language to impact and control your surroundings. No… your character doesn’t learn Maha’ki, YOU do! Well you’ll need to if you want to get anywhere in these puzzles. Continue reading for the rest of our In Verbis Virtus review!

I just had to try out In Verbis Virtus. A game that lets you cast spells with your own voice? I was all over that idea and I have to say that I’m impressed!

The whole game is played through a first-person view using the usual ‘WASD’ keys to move around, and your mouse controls where you look. Holding down ‘left-click’ raises your character’s hand and allows you to speak into the mic to cast a spell you’ve learned.

The beginning of In Verbis Virtus starts you off in a desert outside of a temple. Navigating to the entrance of the temple acts as the tutorial, introducing you to moving, jumping, sprinting and interacting with objects. After this brief period of learning, the puzzles begin.

Placed throughout each level are signs showing a map of the area you are in. The maps show your current position, places of interest and the pathways needed to progress. If you don’t have a very good memory or you prefer to progress through games methodically, it might be a good idea to take a photo of these maps to use for reference further down the track. The entire game is pretty much one giant maze.

By using these maps, you can successfully navigate through tunnels and the like, to find new spells or puzzles to be solved. Most puzzles will require you to have learned a certain spell in order to solve them. So there is a little bit of backtracking.

For example, right at the beginning, one of the passageways you can take is completely dark. Not only that, but the only way to get through this room is to walk a very thin path that zigs and zags. Therefore, you need to have learned a spell that lights the area up to avoid falling down a bottomless pit. Falling is bad, but not bad enough to kill you. Instead you’ll be transported somewhere nearby to where you fell, albeit missing a portion of your health. However once that health bar is depleted, death will follow, prompting you to restart from your previous saved game. So make sure you save whenever you get to one of the few save points.

The puzzles found throughout In Verbis Virtus are quite often very difficult and, if you choose to not have any hints, will require you to explore every nook and cranny of an area to find out exactly what you have to do. I must admit that a few puzzles had me visiting some forums and gaining some *ahem* inspiration to find the solution.

Seriously though, there’s going to be at least one puzzle you come across which will have you pulling out your hair, trying desperately to work out the solution. Alternatively you can just turn on hints from the Options menu.

The story of In Verbis Virtus is played out via animated cut-scenes. As you progress, the story, spells and other information about the temple are filled in to your journal for future reference. For someone as forgetful as myself, this is a god-send. My memory seems to only be able to hold two or three spells at a time… So I’m accessing my journal quite frequently to re-listen to magic words and pronunciations.

My one qualm I have with In Verbis Virtus is that the voice recognition can, at times, seem a bit picky. (Although it might just be my dreadful pronunciation.) My wife can attest to me repeating spells over and over until they work. But then again, she’ll come over, listen to it and cast the spell in one attempt… ¯\_(ツ)_/¯

Being able to cast spells using your own voice is the best part of In Verbis Virtus. It’s one thing to be able to take control of an epic sorcerer, but it’s another to run around a lost temple shouting spells on-the-go and making an impact on your surroundings. It’s even fun to just run around aimlessly and cast any spell you want willy-nilly!

[schema type=”review” url=”https://gamereviewsau.com/in-verbis-virtus-review/” name=”GameReviews SOMA Review” description=”Hold onto your socks gamers, you’re just about to get the opportunity to geek out like you’ve never geeked before! Enter the world of In Verbis Virtus and learn the Maha’ki language to impact and control your surroundings.” rev_name=”In Verbis Virtus Review” rev_body=”I honestly think that In Verbis Virtus is a game that all fantasy game fans should play. There are times of frustration and not everyone enjoys difficult puzzles, but you can always get hints and I haven’t found any other games out there that let you utilise your voice to cast spells as wonderfully as this one.” author=”GameReviews AU” pubdate=”2016-02-25″ user_review=”4″ min_review=”1″ max_review=”5″ ]